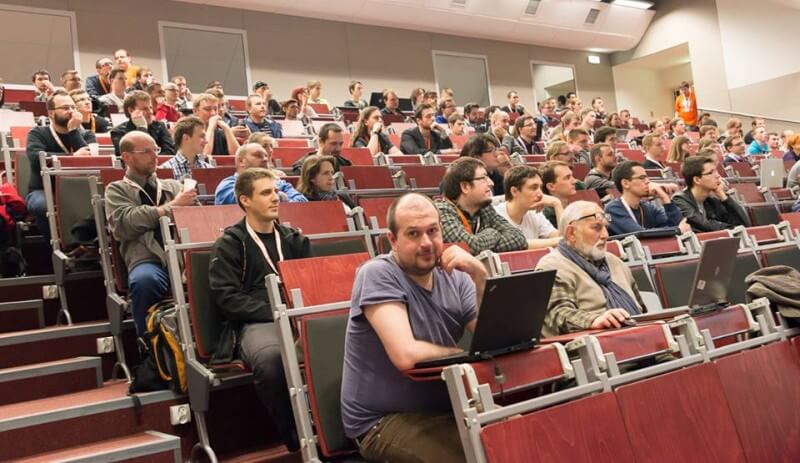 The Open Source Days (DWO) are an open conference for the enthusiasts of open source software as well as for those interested in the practical application of open source software in business. The event has been held annually in Bielsko-Biała since 2006, in the first week of March, with the usual attendance of approximately 100 participants. The attendees have been students and the people from the IT industry.

This year’s edition took place on 8-10 March and was coordinated and organized by the people from Selleo, the University of Bielsko-Biała (ATH) and the founding father of the whole initiative – Dominik Kozaczko.
The conference provided an opportunity to initiate intriguing contacts, meet people fascinated by information technology and spend three days on the exchange of experiences and the exploration of the ins and outs of open source. At this point we would like to express our gratitude to our sponsors: Selleo, Akamai, Google and Pragmatic Bookshelf.
We managed to gather speakers focused on both technical and social issues of free and open software movement. One might have found such topics as OpenStreetMap, MongoDB, JavaScript, CSS3, Django or SELinux on the agenda.

Thanks to Tomasz Gancarczyk, the 6th Open Source Days were held on the premises of the University of Bielsko-Biała (ATH) – the place which is open to new ideas. The main part of the DWO event took part in a spacious lecture hall (with the capacity of more than 100 people) which boasts a high standard of décor and technological equipment, i.e., professional sound equipment, loudspeakers, microphones, amplifiers, projectors, TV sets and customized lightening. The lightning talks sessions took place in the upper hall with an enormous screen, while the workshops were run in one of the computer labs.

The first day started at 4:00 p.m. with participants registration. Everybody was equipped with a DWO T-shirt, fancy stickers and some additional gifts. Following the traditional opening made by Dominik, three lectures were delivered on the first day. One could listen to Tomasz Bąk talking about getting things done with Gmail, Mateusz Juściński exploring MongoDB and Paweł Marynowski describing the ideas standing behind the OpenStreetMap project. The song of the day was Django which could be heard many times during the breaks.

Saturday was packed with lectures, lightning talks and workshops. At the beginning Wojciech Legierski presented some productivity issues of JavaScript and CSS3. This talk was followed by a C++ presentation by Miłosz Bodzek as well as by Paweł Kuśmierski showing us how Akamai helps enterprises accelerate innovation in the hyperconnected world by removing the complexities of technology. Next there were two workshops one on MongoDB delivered by Mateusz Juściński and the other about soft skills for software developers delivered by Dariusz Wylon. Afterwards there were some presentations on a holistic approach to running a company by Mikołaj Pastuszko, on server administration by Stanisałw Klekot, customer relationship by Mateusz Herych, ECMAScript6  new standards by Kamil Gałuszka, on MySQL by Marcin Szałowicz and on Django good practices by Justyna Żarna. The last and most debated presentation was the one about freedom in times of dystopia by Jarosław Lipszyc. Saturday was very challenging because we started at about 10 a.m. and those who decided to take part in the after party, finished it at 3 a.m. the following day.

The last day was filled with many technical presentations. Kamil Gałuszka was talking about RestKit iOS while Adam Przybyła explored security issues with SELinux. Stanisław Klekot presented logging with structure and Grzegorz Nosek provided his opinion on the pam_container.

I hope we will meet next year at the 7th Open Source Days. And I think the feedback we have received will help us make DWO an even better event next year.

The whole event was recorded by the great team of RudeCat Studio and amazing photos were taken by Michał Czyż and Ireneusz Skrobiś.