Day With Board Games 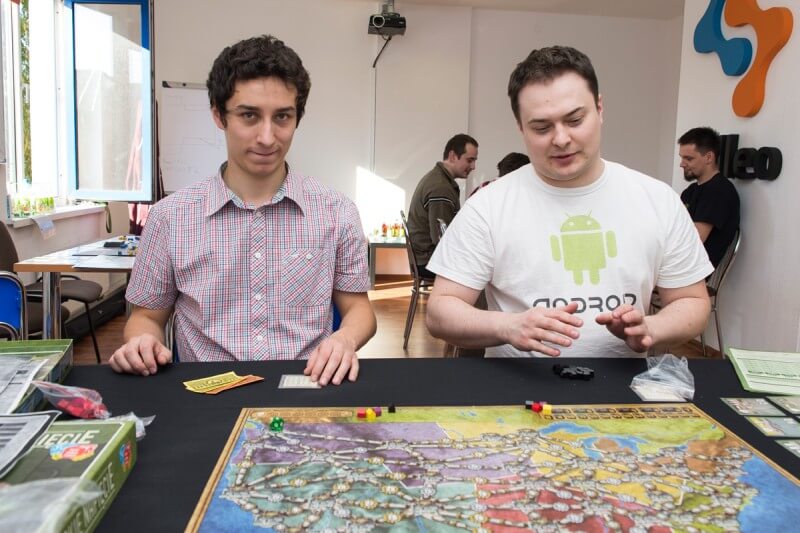 At the 26th of October we had the first edition of Day With Board Games. It was of course prepared by Tomasz Czana and Bartłomiej Wójtowicz. During the preceding days organizers made some tutorial videos about games we were supposed to play and posted them online (you can find them here).

At the day of the event Tomek and Bartek brought 8 titles and prepared 3 tables where the participants could play different games. It was a really family happening this time: Grzegorz Rduch brought his two kids: Oskar and Emilia. I took my wife Monika, Bartłomiej Danek came with his wife Gabriela, and Dawid Pośliński showed up with his girlfriend Agnieszka. The whole group was accompanied by Arek Janik and Sebastian Ewak.

It is easy to count that there were 13 players and I must say that we were the “Lucky Thirteen” because the event was a great success. We tried out a lot of titles: Pandemic, Power Grid, Dixit, Carcassonne, Letters from Whitechapel, 7 Wonders and Ticket to Ride (only Airlines were not used this time). The games were competitive but conducted in a really friendly manner and almost everyone won at least once.

To sum up: all of us had a great time and the Saturday passed by impossibly fast. I think that the next event should take place in about two months and will be at least as fun as this one and gather even more players.

Ireneusz is a full-stack lead developer using his leadership skills to accurately translate and extrapolate project specification into high-quality products.