Global Day Of Coderetreat 2012 A Day Like No Other 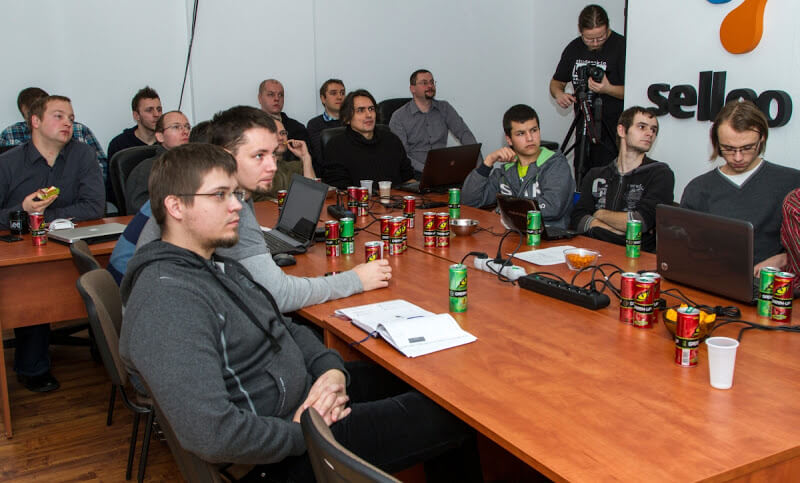 „A day like no other” announced Corey Hines encouraging the global IT community to join the 2012 edition of Global Day of Coderetreat. Corey is a great guy standing behind the idea of code retreat which is supposed to provide developers the opportunity to take part in focused practice on the fundamentals of software development and design. The Global Day of Coderetreat is a world-wide event hold to celebrate the art of software development. In 2011 it gathered over 1.800 passionate software developers in 94 cities around the world for a busy day of practicing the craft of software development. We did gather the local community in 2011 and were eager to do so once again. The Selleo Headquarter become the perfect venue for this day-long, intensive practice event because this time we wanted to promote a slightly different format with a triple coding dojo session.

The main goal of the Global Day of Code Retreat is to promote the concept of practice in the development community so we have chosen a Coding Dojo format (a meeting where a bunch of coders get together to work on a programming challenge in order to improve their skills). During three programming sessions developers focused on coding in front of others, showing off their programming skills coding the tic-tac-toe game in three different languages Ruby, Python, Javascript / Coffeescript.

The 2012 edition was held on December 8th .  After the warm welcome and a bunch of free snacks the opening speech was provided by Grzegorz Rduch. He introduced Selleo as a Ruby On Rails and mobile development house and after that, in a few words, described both technological (programmers day) and business (mikstura, stoos) events Selleo was and is going to host.

Next Michał brought in the concept of Coderetreat and Coding Dojo and participants prepared for the first session with Ruby. It was conducted by Bartek Danek & Błażej Kosmowski who covered such issues as  rspec, pair programming, tdd, aspec-oriented programming, guard, vim, pry for debugging.

And finally we could take a look at Java Script and led by Tomek Bąk & Tomek Borowski participants could master programming in effective and efficient way.

Each session was followed by retrospection so after three long hours of coding we could rest for a while, chat and east delicious dinner. The break ended and Rafał Bromirski showed us the  tic-tac-toe game created in pure CSS.

And this was the end of the official part of the Global Day of Coderetreat. For the last hour we were performing some pair programming and using Coding Dojo Randori Kata formula. The 2012 Global Day of Coderetreat was  hosted under the Mikstura.IT brand so If you want to join the web and mobile community, just visit the Mikstura.IT web page for more details on future events and join in next time.