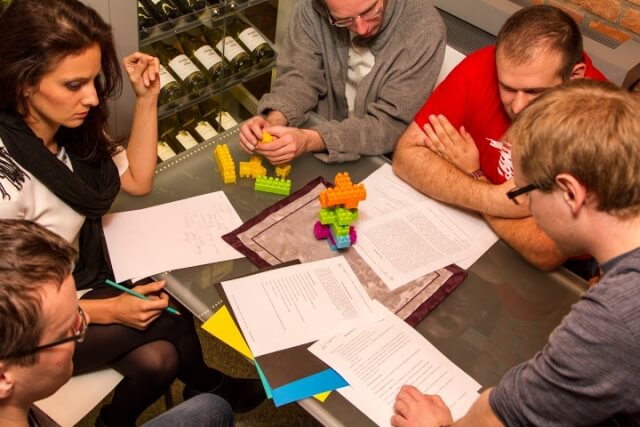 Another great event just behind us. On the 27th March we met in Rybnik to discover the best way to build a collaborative team. This time we had an opportunity to participate in workshops focused on soft skills development and listen to some amazing lightning talks.

Trying to explore factors that favour collaboration and team work we started the event with workshops led by Dariusz Wylon. At first participants were divided into four groups and had to arrange several different objects in classes according to shared qualities. They were guided by task- and relationship-oriented leaders.

Another task supported  a strong sense of community and teamwork. Teams were supposed to create the highest building using marshmallows and thin spaghetti . And as usual the winning group received some tasty rewards.

After pizza and drinks, speakers shared their inspiring stories during the lightning talk session.
Ireneusz Skrobiś, a great programmer and DC / Marvel comics fan, told us how to build a team of superheroes. The Justice League (a team of superheroes, appearing in comic books published by DC Comics) were used to show some important collaboration rules.

Next Maciej Wiśniowski explained how to create your own JQuery, sharing with us some practical tips and hints.

After the talk by Adam Grzelec on the rules of influence we had another technical presentation. Michał Czyż, dedicated team leader and developer, presented some insightfull thoughts on Merge vs Rebase.

After that, we had a chance to listen to [Tomasz Borowski](https://selleo.com/people/. This creative front-end developer and football player delivered a speech “Can IT teams learn something from sport teams?”.

The LightningTalks Session was the last official part of the event. What followed was the time for networking and having fun. You can check the event gallery here. If you want to join the web and mobile community, just visit the Mikstura.IT web page for more deatils on future events and you can also press  like on our facebook profile.