In Search For Better Management Leadership 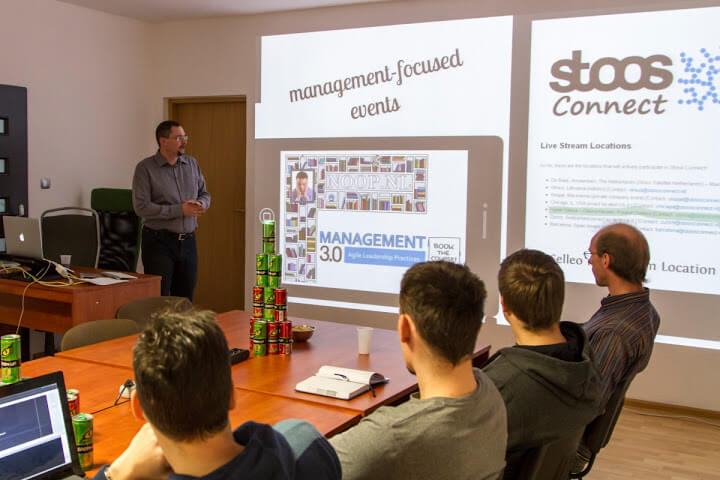 Stoos Connect was the event launched in January 2013 in Amsterdam in celebration of World Stoos Day by Stoos Satellite Netherlands. Unlike the Stampede event, the special feature of the Conference was that it could be audienced globally thanks to live multimedia streaming so that anyone, anywhere could watch the sessions.

Behind the event stands a group of senior executives, business strategists, managers, academics and lean/agile development practitioners who first met in Stoos, Switzerland in January 2012. They endeavour to uncover a better way for leadership in contemporary organizations which are still relying on linear, mechanistic thinking which is reflected in the current economic crisis, increased inequity, bankruptcies and general disillusionment.

A brief review of the topics of the conference, divided into one-hour-sessions, proves the innovative activity carried out by Stoos Network.  Among others, there were presentations on employee motivation, common mistakes companies make when managing their business culture or misconceptions in thinking about sales. To enlist the most prominent speakers, let us mention such names as Daniel Pink, Jurgen Appelo, Dawna Jones and Lisa Earle Macleod.

Selleo actively participated in the event setting up one of the three streaming locations in Poland as well as inviting and hosting the people involved in the management of software development houses from the south of Poland.

Among the presentations we liked most, there was the one by Daniel Pink, who dealt with the issue of motivation.

He started with a seemingly trivial question, namely: “If you reward something, do you get more of the behaviour you want?” He shared the results of the survey conducted at the Massachusetts Institute of Technology (MIT). The findings were quite surprising:  in case of simple, mechanical tasks, a typical motivation scheme, (better performance = higher reward), common within organizations, actually worked. This turned out not to be like that in the case of tasks aiming at rudimentary cognitive  skills where larger rewards led to poorer performance. \ The phenomenon is known to psychologists, sociologists and economists and still business practitioners notoriously disregard the findings when designing and implementing remuneration policies. The conclusion is that when a task requires some conceptual, creative thinking, people will be no longer motivated by financial rewards. It could thus be perfect to pay them enough to take the issue of money off the table. According to Pink, there are three factors that affect not only better performance but also stimulate personal satisfaction. These are: autonomy (the desire to be self-directed), mastery (the urge to get better) and the sense of purpose. It might be a good idea to find enough room for them in your company.

The presentation by Jurgen Appelo (the author of already well-known book Management 3.0 – Leading Agile Developers, Developing Agile Leaders as well as a popular blog NOOP.NL ) was linked to the previous one. He reflected on how to develop a bonus programme without destroying intrinsic motivation. As he says: “Paying people for work, without destroying their motivation, is one of the most difficult challenges for management. Regrettably, most compensation systems are unfair and unscientific”. He pointed out the common misconceptions of paying bonuses as something expected, relying on employees’ individual achievements, not depending on co-workers’ opinions and lacking the element of randomness.

Among the worth mentioning there was  certainly the presentation given by Dawna Jones entitled: “3 Mistakes Companies Make When Changing the Business Culture.”

According to Jones: “The same principles Nature uses to keep a complex system stable we can use to dynamically adapt business cultures”. As well as this, she also stressed the importance of self-organizing by means of cleaning barriers to collaboration / innovation which brings about creating  high performance workplaces and achieving personal fulfillment. In summary she pointed out at “enormous possibilities which will appear when we replace force and struggle to survive with intelligence and creativity”.

As well as the already mentioned, we should not overlook the speech by Lisa Earle Macleod which referred to an original philosophy of selling. The speaker is the author of a highly praised book entitled “Selling with Noble Purposes – How to Drive Revenue and Do Work That Makes You Proud.” Macleod takes issue with the common belief that money is the primary motivator for top salespeople. She discovered that selling with some noble purpose is bound to outbalance that aiming entirely at sales goals and money. Behind such a statement there are 10.000 hours spent with top sales performers and the findings reveal that the Noble Sales Purpose (NIP) has proved to be a truly effective and generally outstanding option.

The next insightful presentation was that by Arjan Polhuijs whose area of interest embraces the impact of innovation. The speaker pointed at three worlds that need to interlink in order to assure truly robust and sustainable growth. These worlds are: a) the Imagined with such ingredients as vision, creativity, ambition, single-mindedness and the truly differentiated concepts; b) the Real which tests the practicability of the Imagined and c) the Human, which includes the set of qualities like ownership, passion, alignment and permission, without which even the perfect theories will never work in practice. By combining these three worlds with one simple, insights-led approach, Polhuijs produces a matrix which contains everything necessary to produce impactful innovations.

We also liked Steve Denning’s,”Towards the Tipping Point in Leadership and Management”. Apart from those there was a number of other interesting presentations; to mention a few, there were those by Niels Pflaeging, Joe Justice, Olav Maassen and Claudio Perrone.

The heated debate that followed, focused on both the presentations and the possible improvements that might be introduced in the future conferences. From our perspective, there might be fewer presentations with longer breaks in between, which would certainly facilitate longer and more fruitful discussions. We had one longer debate during the dinner break which was cool, taking into account that we were honoured to host managers from a few software development houses who rarely have an opportunities to meet their counterparts from other companies.There is quite apparent need for such contacts and events that help to foster them.

\ The attention was also drawn to the varied quality of presentations which, perhaps, calls for pre-selection / pre-qualification procedures in the future.It might also be a good idea to consider organizing some such events with an industry focus.

We would like to express our gratitude to both the organizers and the guests who came to share their management experiences.

For those trying to redefine their management and/or leadership approach it might be a good idea to probe deeper into the variety of topics which have been only briefly outlined above. The Stoos movement is not alone in pushing for a shift in the leadership and management paradigm. Some other movements that are genuinely dedicated to achieving a paradigm shift in leadership and management include the Management Innovation Exchange, the Drucker Society Global Network, the Beyond Budgeting Roundtable, the Scrum Alliance, the Agile Alliance, theSociety for Organisational Learning and the Daedalus Trust.